If you are a nonresident alien, you are taxed only on your U.S. source income you have earned.  This U.S. Source income is further categorized into:

Also known as Passive Income, this Income is fixed when it is paid in amounts known ahead of time. Income is determinable whenever there is a basis for figuring the amount to be paid. Income can be periodic if it is paid from time to time. It does not have to be paid annually or at regular intervals. Income can be determinable or periodic, even if the length of time during which the payments are made is increased or decreased.

The following items are examples of FDAP income:

F.D.A.P. incomes are taxed at 30 percent or lower tax treaty rate as applicable.

As per IRC subsections 871(h) and (i), Nonresident aliens are not taxed on certain kinds of interest income, provided that such interest income arises from one of the following sources:

The following discussion assumes that the capital gains in question are not effectively connected with the conduct of a trade or business in the United States.  If this is the case, then the capital gains are taxed at the regular resident tax rates.

Aforesaid, the sourcing rule does not apply to real estate properties which are automatically sourced in the United States.

For our analysis, we have bifurcated nonresident aliens into following persons:

If you fall under this category then the IRS welcomes you and your investment wholeheartedly and treats the complete capital gains you make (other than real estate) as a nontaxable income in the United States as you will have a tax home outside the United States.

2. Nonresident aliens who come to the United States either as a student (F1 visa), or as scholars (J1 visa) or are employees of foreign governments (G1 visa)

A flat tax of 30 percent was imposed on U.S. source capital gains in the hands of nonresident alien individuals physically present in the United States for 183 days or more during the taxable year. This 183-day rule bears no relation to the 183-day rule under the substantial presence test of IRC section 7701(b)(3). 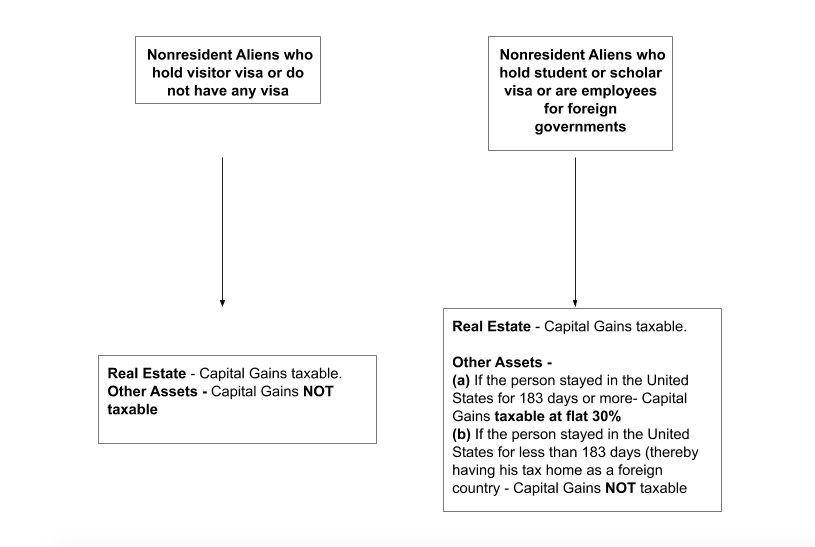 Previous Post Interplay of tax residency provisions for individuals between USA and India
Next Post How would you Describe the CFO of the Company?